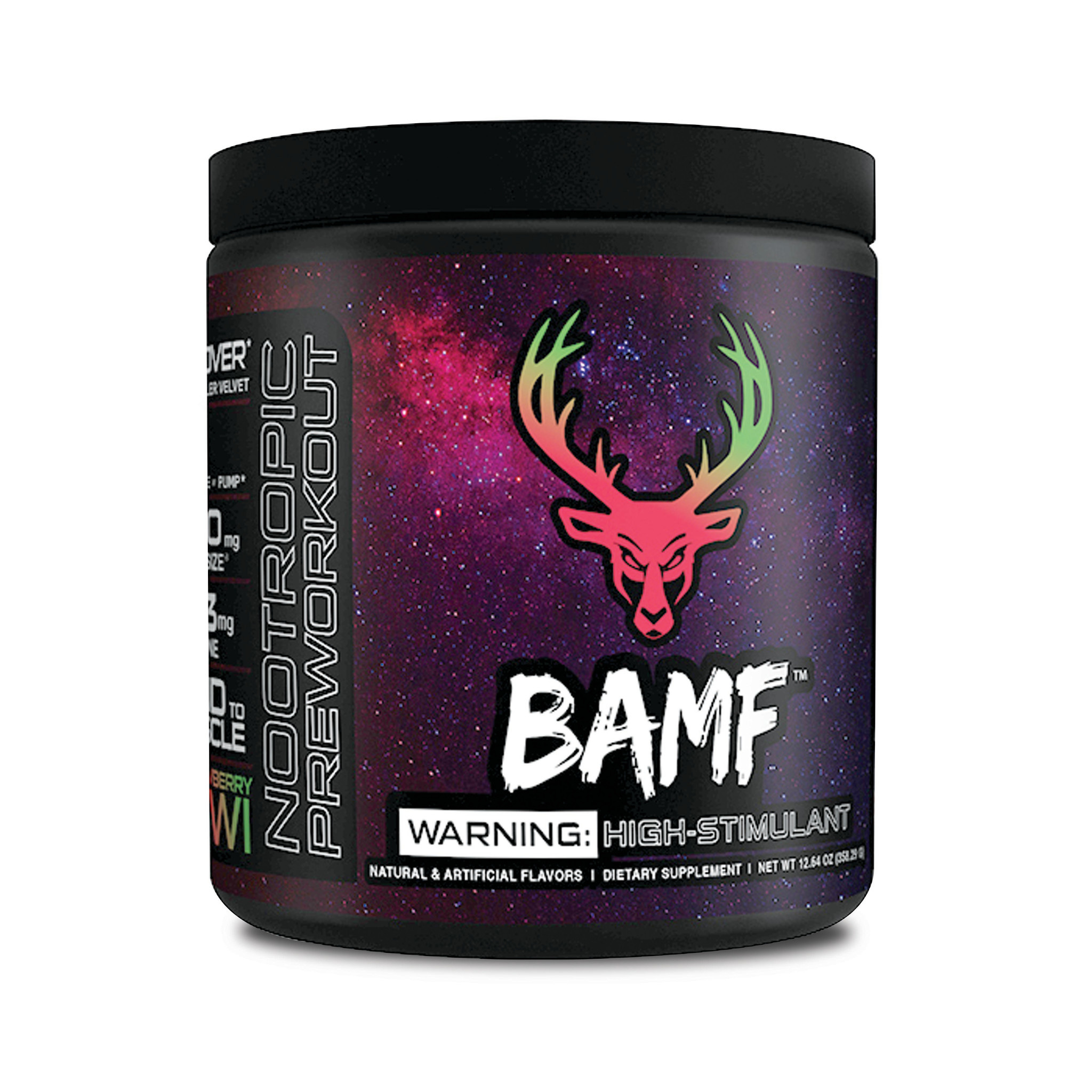 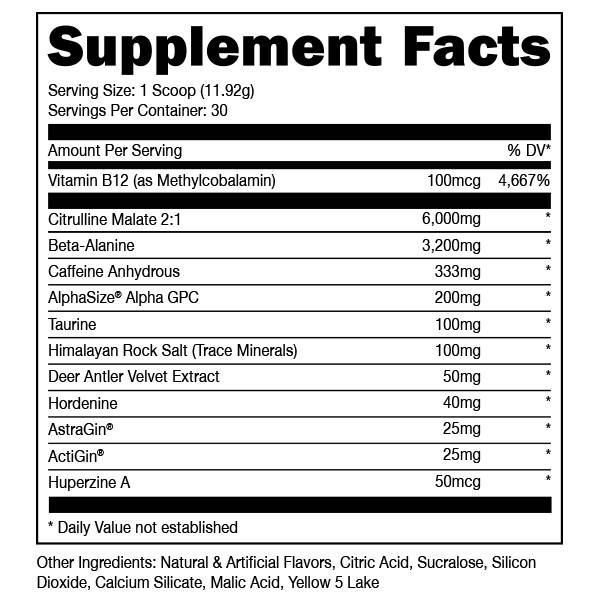 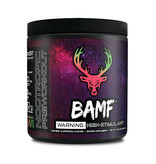 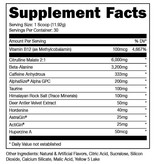 The world’s first and only true NOOTROPIC PRE-WORKOUT

Any elite performance is an outcome of the melding of your brain, with its synapses, both neuron & chemical, firing synergistically to command your body, with its muscles and everything they attach to, to perform the outcome you demand of it, of yourself.*

A plant based compound that has been shown to have a: nootropic increase, physical performance increase, but a fat burning increase as well. An underground metabolism and mental booster not just touted in body building communities, but has seen an increase in popularity in gaming and silicon valley for: increased attention span, calorie burning, mood, and productivity. The primary driving mechanism being the link between hordenine and the protection and release of norepinephrine, which in turn stimulates your central nervous system leading to countless benefits.*

Now a cornerstone in most nutritional arsenals. This amino acid plays a vital role in keeping your PH levels optimal. Beta-Alanine works by cranking up the L-Histidine in your body, and in turn increases the levels of carnosine. Carnosine is important in fighting the build up of hydrogen in your muscles; as well as improving the performance of fast-twitch muscles needed for explosive movements such as: clean & jerks, sprinting, box jumps. When the hydrogen ions build up, we get lactate and acid this is a defense mechanism to protect our body. In other words your body is telling you that you don’t have enough oxygen, enough carnosine, and we need to chill for a bit. By consuming beta-alanine; we increase our ability fight off that lactic acid build up, and push ourselves closer to our goals.*

Alphasize Alpha-Glyceryl Phosphoryl Choline (A-GPC) provides an immediate supply of choline to the bloodstream. AlphaSize® GPC is a clinically proven ingredient and is considered to be one of the most effective brain nutrients in the world. AlphaSize® A-GPC has interesting utility in “mind-to-muscle” sports nutrition formulations, where it acts to optimize muscular power output, sharpen agility, and also delay mental fatigue. This is due to its action involving motor unit activation of muscle fibers and subsequent muscle contraction, as well as due to its mental sharpness benefits. While doing studies for AlphaSize, scientists discovered that it is also a “Growth Hormone Potentiate”. AlphaSize prior to a work out can help you reach your growth hormone potential, and in turn lead to greater results.

AstraGin™ has shown in multiple clinical studies to increase the absorption of L-Citrulline. Using this ingredient in conjunction with the right formulation has proven to increase the bioavailability of the amino acids, arginine & citrulline by up to 66.7% Which in turn means a better bang for your ‘buck’ and insane pump for your lifts.

ActiGin™ is a patent-pending compound and is supported by a 2015 published human clinical study, which delivered the following results: (a) increased glycogen recovery by up to 370 percent, (b) increased high-intensity endurance performance by up to 20 percent, and (c) decreased oxidative inflammation up to 69 percent after high-intensity exercise. ActiGin is unique in that it loads your muscles with more glycogen pre workout and enhances citrate synthase activity during workout.

This remarkable trademarked ingredient is a clinically proven, fast acting, anti-inflammatory that increases glycogen recovery by up to 370%, increases VO2 max by up to 20% & decrease oxidative inflammation by up to 66%. Created by combining specific strains of ginseng and rosehips, this super product has revolutionized training as we know it.

A secret of professional athletes everywhere, Himalayan Rock Salt plays a vital role in Bucked Up. Extracted from deep in the Himalayas, this ancient salt has been preserved from man’s pollution for thousands of years, and is a pure source of over 80+ trace minerals. Trace minerals are a key factor in the prevention of: cramping, over training, muscle fatigue, injury & recovery.

The geographical location of the mountain range has helped preserve the integrity of these trace minerals, which are made up of: magnesium, calcium, potassium. Iodine and much more. Table salt is usually derived from locations that have usually been over polluted by man, as well as being chemically treated during it’s manufacturing process. Trace minerals play a vital role in muscle performance, the prevention of cramping, fatigue, cognitive function, coordination, focus, thyroid function, electrolyte balance, hydration, blood flow (pump), the removal of body toxins, metabolic rate, and most importantly, crushing your goals. We use the highest quality rock salt because we understand there’s a direct correlation between how you perform day in and day out, and what you put into your body.

Methyl B-12 scientifically referred to as Methylcobalamin is a much better retained, and more bioavailable than other forms of B-12. Methyl B-12 is a cofactor of methionine synthase, which reduces toxic homocysteine to the essential amino acid methionine. In layman’s terms what this means is that it will convert toxicity into an essential building block of muscle. It will also promote healthy sleep as well as assisting with nerve function in the brain. This will lead to a much better focus, and tenacity in your workouts. A workout is nothing more than synapses and nerve function. When we can get them operating how they should, we have no need for stimulants which increase blood pressure & diminish the pump.

An amino acid found primarily in fish, Taurine has been proven to treat heart failure, high blood pressure, liver disease, high cholesterol, ADHD and much more. Scientists have also discovered applications in performance as well. Japanese researchers discovered that adding Taurine to your regiment will increase your VO2 max. What this means in layman’s terms is that your ability to use and transport oxygen; which plays a huge role in determining your point of failure. A higher VO2 max means more reps, more weight, more distance, faster times, more results

PLEASE NOTE: Product image is representative of the product offered but may not have the exact attributes. Please read product description for the specific attributes of this product. The information above is intended for reference only. While we attempt to keep our information accurate, we cannot guarantee it is an accurate representation of the latest formulation of the product. If you have any concerns, please visit the vendor's web site. The information above are the views of the product's manufacturer. These statements have not been evaluated by the Food and Drug Administration. This product is not intended to diagnose, treat, cure or prevent any disease.

Statements regarding dietary supplements have not been evaluated by the FDA and are not intended to diagnose, treat, cure, or prevent any disease or health condition.

Best energy and focus I've found in a preworkout.

I love Das Labs and it’s got some good stuff in this!! I have a great workout with a perfect amount of Stim but I’m not up all hours of the day (I work night shift). Give this stuff a try and you’ll never be disappointed!

Great customer service. Got to me in 2 days. Thanks again

Add your review
5 stars based on 4 reviews